Georgia O’keefe & Kathe Kollwitz
Georgia O’Keeffe was born in Sun Prairie, Wisconsin in 1867. The second of seven children, O’Keeffe longed to be an artist from an early age. In 1905 she attended the Art Institute of Chicago and a year later went to study at the Art Students League of New York. Though her student work was well received she found it unfulfilling, and for a short time abandoned the fine arts. She worked briefly as a commercial artist in Chicago before moving to Texas to teach. During the summer of 1915, O’Keeffe took classes at the Teachers College of Columbia University in South Carolina, and there began her re-entry into the world of painting. While in South Carolina she met Arthur Dow, a specialist in Oriental Art. Dow’s interest in non-European art helped O’Keeffe move away from the forms she had found so stifling in her previous studies. Soon after O’Keeffe’s return to Texas, she made a handful of charcoal drawings, which she sent to a friend in New York. That friend ended up getting her work shown at a gallery and in time persuaded O’keefe to move to New York. While there O’Keeffe painted some of her most famous work. During the 1920s, her large canvasses of lush overpowering flowers filled the still life's with dynamic energy and erotic tension, while her cityscapes were testaments to subtle beauty within the most industrial circumstances. In 1929 O’Keeffe took a vacation with her friend to Taos, New Mexico. The trip would forever alter the course of her life. In love with the open skies and sun-drenched landscape, O’Keeffe returned every summer to travel and to paint. When Steiglitz, her husband died in 1946, O’Keeffe took up permanent residence there. More than almost any of her other works, these early New Mexico landscapes and still lifes have come to represent her unique gifts. The rich texture of the clouds and sky were similar to her earlier, more sensuous representations of flowers. But beneath these clouds one found the bleached bones of animals long gone. Throughout the 1950s and 1960s, O’Keeffe’s fame continued to grow. In March of 1986, at the age of 98, O’Keeffe passed away at St. Vincent’s Hospital in Santa Fe, New Mexico. For many, her paintings represent the beginnings of a new American art free from the irony and cynicism of the late 20th century. 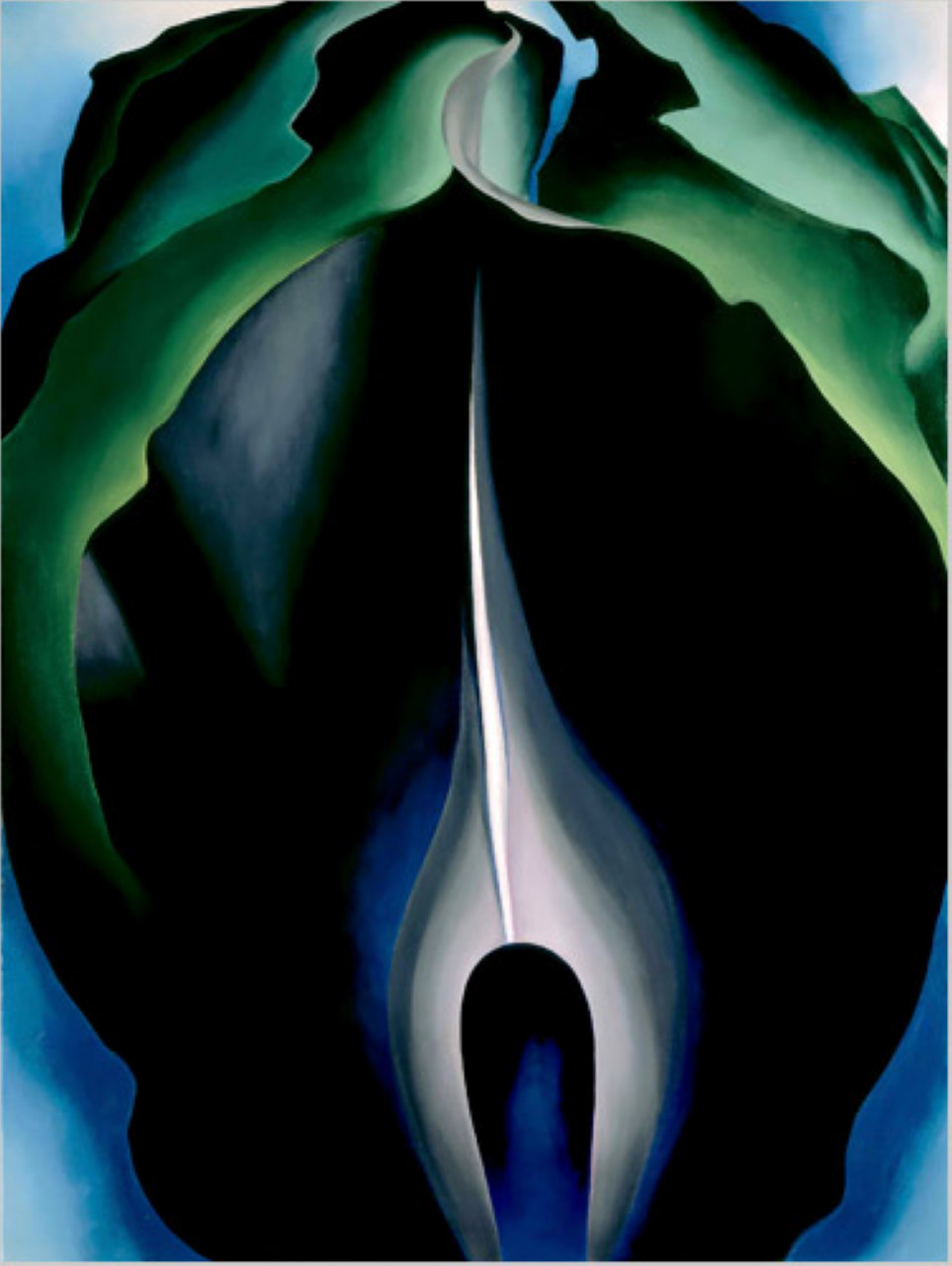 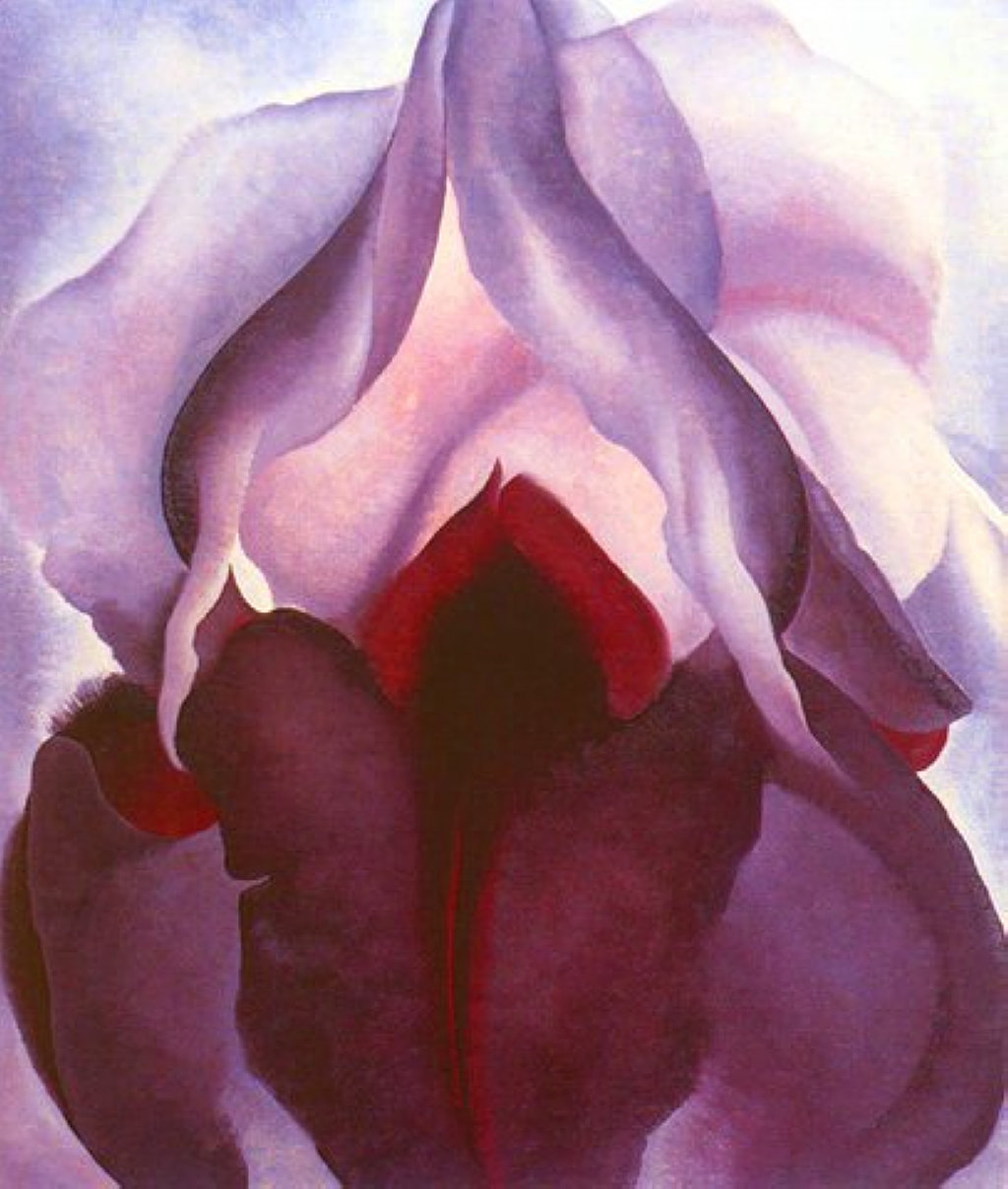 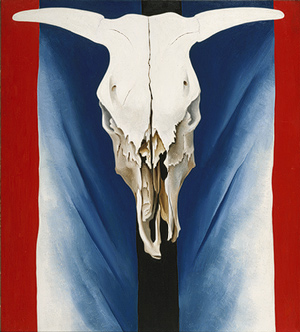 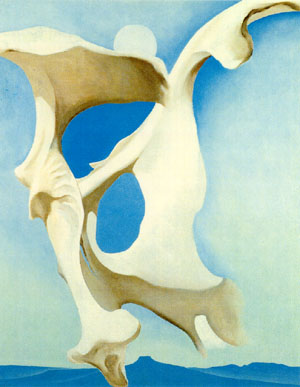 Kathe Kollwitz's imagery is marked by poverty stricken, sickly women who are barely able to care for or nourish their children. Kollwitz's art resounds with compassion as she makes appeals on behalf of the working poor, the suffering and the sick. Her work serves as an indictment of the social conditions in Germany during the late 19th and early 20th century. The daughter of a well to do mason, Kathe Schmidt was born in East Prussia. Her father encouraged her to draw and when she was 14 years old she began art lessons. She attended The Berlin School of Art in 1884 and later went to study in Munich. After her marriage to Dr. Karl Kollwitz, the couple settled in Berlin living in one of the poorest sections of the city. It was here that Kollwitz developed her strong social conscious which is so fiercely reflected in her work. Her art features dark, oppressive subject matter depicting the revolts and uprisings of contemporary relevance. Images of death, war and injustice dominate her work. She worked with a variety of media including sculpture, and lithography.It may be argued that her work was an expression of her own life experience. Her personal life was marred by hardship and heartache. She came into contact with some of the cities most needy people and was exposed to great suffering due to the nature of her husband's work. She lost her son to World War I and her grandson to World War II and these losses contributed to her works as well. Kathe Kollwitz became the first woman elected to the Prussian Academy but because of her beliefs, and her art, she was expelled from the academy in 1933. Harassed by the Nazi regime, Kollwitz's home was bombed in 1943. She was forbidden to exhibit, and her art was classified as "degenerate." Despite these events, Kollwitz remained in Berlin unlike artists such as Max Beckman and George Grosz who fled the country. She was proud of her work and stood up for what she believed to be right. 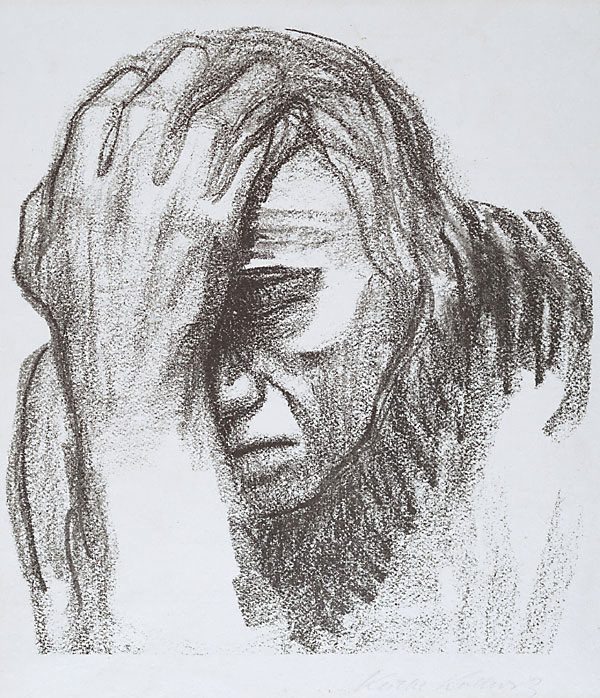 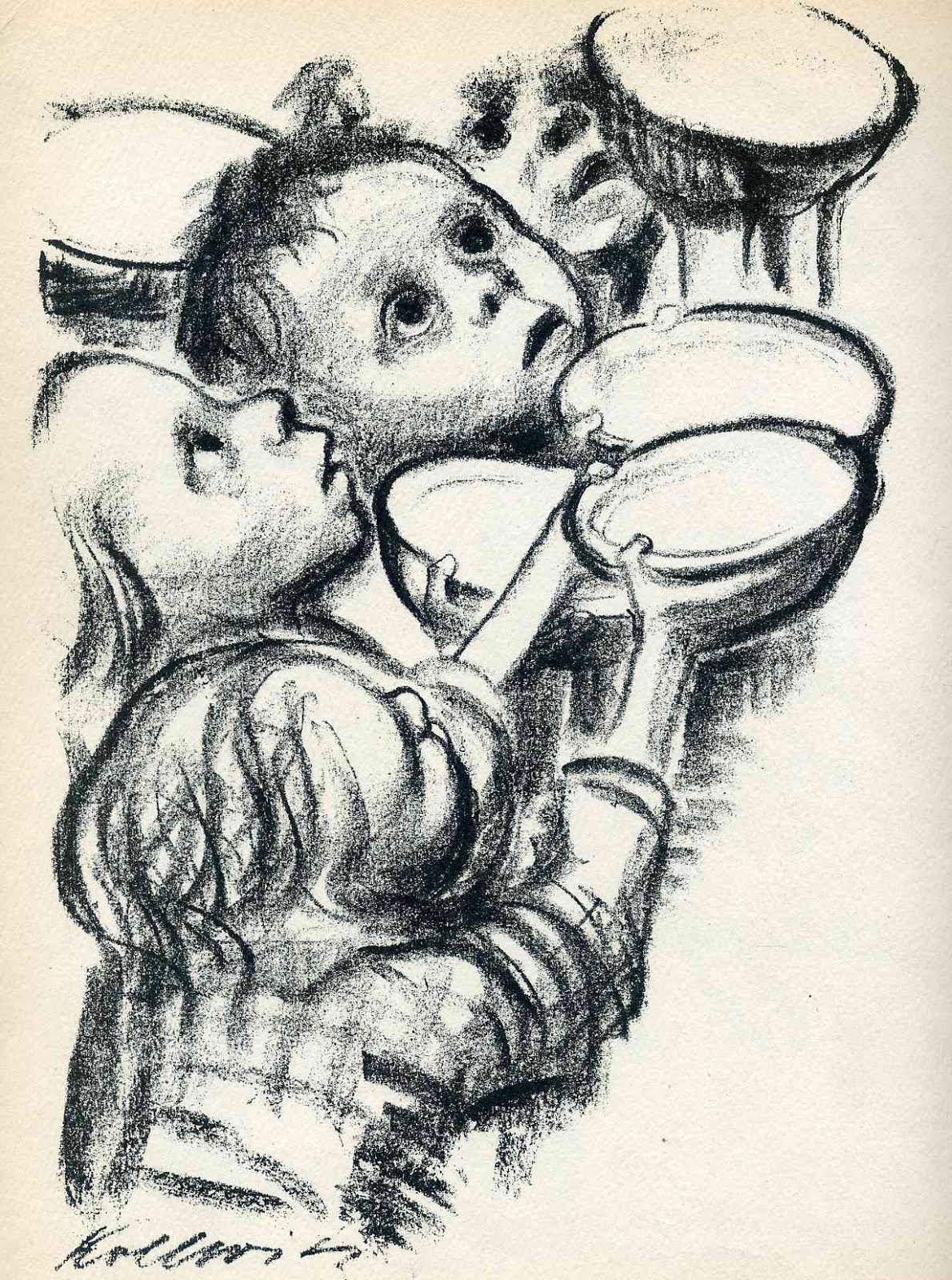 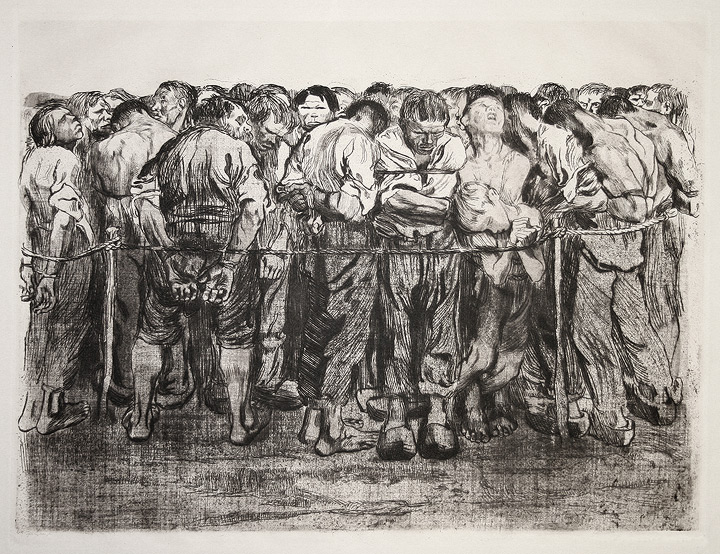 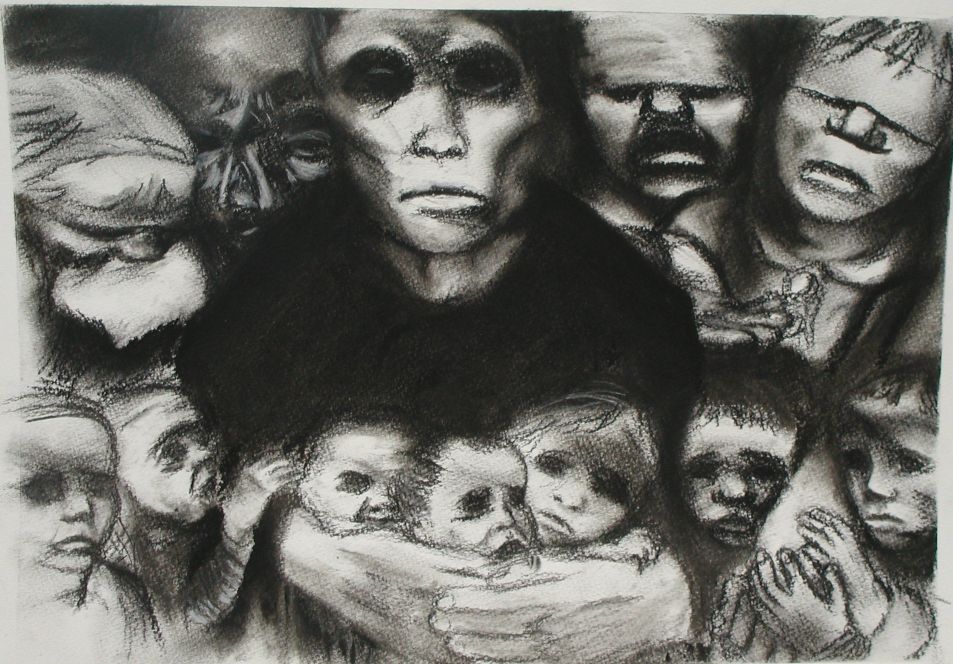